Term 2 is up and running and we’ve had a great start. On the first day alone we restarted our My Place series, investigated square numbers and square roots, explored water colours with the amazing Ms Sveinbjornsson and researched some peace symbols with a view to creating our own. A very busy start!

Day 2 was very different. Whilst some students stayed at school, I took 26 girls with Mr “Awesome” Jones to play in a local soccer tournament. Nearly all the girls had never played soccer and they were up against some experienced teams. The lack of experience showed, especially during the first game when they were all fairly static, almost rooted to the spot. Some of the girls were netball players and they weren’t sure where they were allowed to go. However, as the day progressed and the girls experience grew they started to understand the game much better. By the end the defence were moving smoothly as a unit up and down the pitch; the midfield players were racing up and down to support the strikers and the defence; and the strikers were using their skill to attack the opposition. The girls worked together to mark the opposing players and to create space for themselves to pass the ball. After 5 games in hot weather on full size pitches the girls hd run themselves selflessly into the ground. Our school had two teams and while neither won the tournament (although both won games) they thoroughly enjoyed themselves.

The most amazing part of the day for me was to witness how a group of girls with little or no idea about the game worked together and developed their skills. By the end of the day they had become confident and skilled players, positioning themselves, harrying the opposition and working together as a team. It was truly inspirational and everyone was rightfully proud of them. Well done, girls! 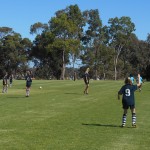 Brooke calls for the ball.

One thought on “New Term/Girls Soccer”