In preparation for ANZAC day our fabulous library officer, Ms Higgs, has created an awesome display in the library. To help with this some of the staff also brought in items of their own that have some military significance, or are mementoes of their relatives who have fought in war. I lent some photos of one of my ancestors (John William Terry from my mother’s side) and his death plaque from World War 1. Check out the photos below and click on them for a larger version. 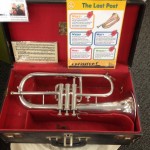 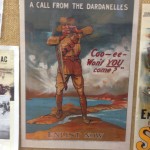 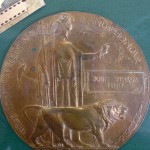 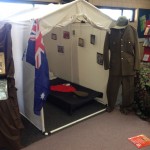 This week The Giants came to Perth as part of the incredible Perth Festival. The Giants are huge puppets that are powered by amazing, energetic people, pulling ropes, swinging from trucks and abseiling from cranes in spectacular red uniforms. The puppets come alive and walk through the street, although a huge part of the attraction is watching the operators as they perform their medieval-like manoeuvres. Have a read of the blogs of Savannah, Shantelle and Tarnika as they pass on their experiences of this fabulous weekend.

Last week the whole school turned out to complete our yearly lapathon. The year sevens had to run 20 laps around a set course within around 40 minutes. The students did a great job, especially in the hot weather. The money raised from the lapathon will go to a number of great causes to support the school and the students. Check out the photos. 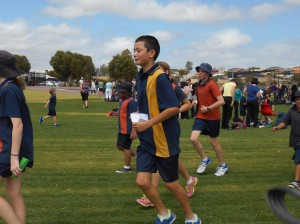 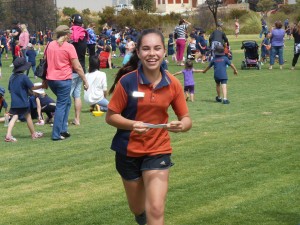 This week we had a “dress up as a book character” day. I took part myself and dressed up a Matt Smith’s Doctor Who and, if I say so myself, I looked pretty cool (well, bow ties are cool). Unfortunately, I didn’t have any photos taken of myself, but I did have some taken of the students who actually looked even better than I did! It was an amazing day, organised by our incredible Yorkshire import, Mrs Brayshaw. Often on dress up days we have a few people who make an effort, but this time we had probably the biggest and most impressive turnout ever. Check out the photos below for a glimpse of the quality efforts from LA19. 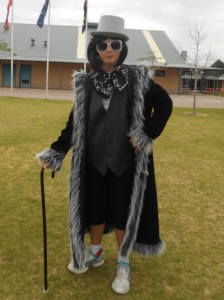 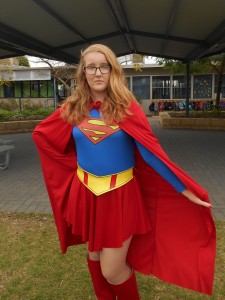 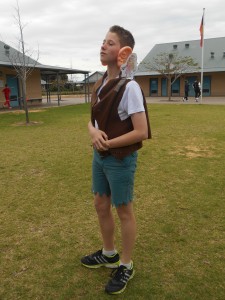 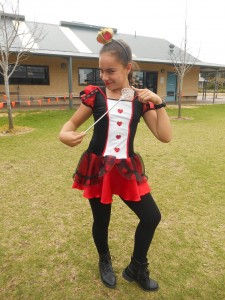 The Queen of Hearts

I know it’s not all about the winning and that we should promote the idea that to participate is the real goal (which we do), but it’s great to see the beaming smiles on the faces of the students when we win. Last week we took part in a sports carnival against several other teams in soccer, modcross, netball and Aussie rules football. It was an amazing day (thanks to our legendary Phys. Ed. specialist Mr Jones) and we managed to come away with most of the trophies on offer. The Aussie rules team were successful, as were the modcross team, whereas the netball teams came a solid second and the boys’ soccer team had some very impressive wins. However, the team that I was in charge of, the girls’ soccer team, won the coveted trophy. This was a trophy that our school has never won, but we knew following our practise games (a previous post) that we were in very good shape. The girls were magnificent, winning 5 out of their 6 games, but what stood out for me was their team spirit, their sense of fair play and their desire to run themselves into the ground, draining their last drops of energy to make sure they gave their best.

It was a great moment when the girls were called up to receive the trophy and I can say that I was absolutely proud of each and every one of them. 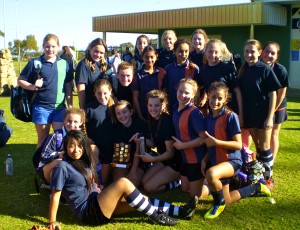 The annual fortnight of swimming is upon us which means our usual timetable has taken a dive. Not that we’re going to complain; following a very intense run up to our NAPLAN testing, including a week of the tests themselves, a break from the serious business of school life comes just at the right time. Learning to swim is also an essential life skill, especially for a nation that enjoys spending their long hot summers at the beach or in the backyard pool. All in all, even though term two is pretty mixed up, it’s still going swimmingly! 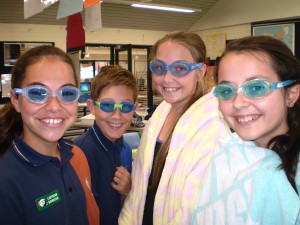 This week we had a visit from the local senior college who brought their performing arts students to display their amazing skills. The acts were incredible and left our students enthusiastically chatting about it for days afterwards. I’m not going to write about it myself, instead I’ll leave you to read about it on the students’ blogs.

A big “Thank You” to our music teacher, Mr Millar for organising the visit.

Our class (LA19) along with the class next door (LA18) recently produced a movie for our assembly item. The vision was supplied by Mrs Boylan and the technological know-how by myself. Originally the narrative parts were supplied live by the two singers (Callen and Sarah), but for this movie I’ve added them to the whole project. I hope you enjoy it.

This week we competed at interschool sports with several other schools in our area (read Monika’s explanation here). The sports we competed in were: soccer (boys and girls) AFL, modcrosse and netball. To read about the events and the varying successes of the teams check out these links:

Today we had the Performing Arts students from Wanneroo Secondary College entertain us with their amazing range of talents. The performances were fabulous and ranged from dance troupes to soloists and really highlighted the opportunities available to talented youngsters at Wanneroo Secondary College. A big thanks to Mr. Millar for helping to organise this event for us.