This week our boys and girls soccer, football (Aussie Rules), modcross and netball teams played practise games against the students from another local school. This was in preparation for our major interschool sports competition next week where we will play against teams from across the district. Unlike our previous outing where all our teams won every game, this time we were tested a quite a bit more. Unfortunately, most of the teams didn’t fare well, though none of them were actually thrashed. However, the incredible girls’ soccer team (of which I happen to be the humble coach) enjoyed a 5 to nil win. This comes after our previous game where we won 15 to nil. So far our plucky goalkeeper, Jen, has kept a clean sheet (let’s hope this continues), but that is in a large part down to the outfield players who have demonstrated skill, tenacity and courage in what have been some very physical, hard fought contests. Check out the photo’s of the girls in action. 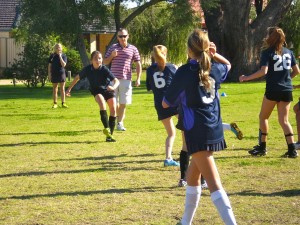 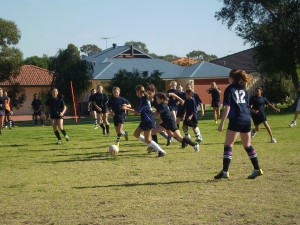 Chloe makes a dash through the centre.