Mother’s Day was a mad, hectic and stressful time for LA14 this year. I set the students the challenge of producing a very personalised gift for their mums, but the short time-frame (one and a half weeks) meant we would be cutting it extremely fine. The students created a wooden photo, a rectangle of wood that has their photo transferred onto it and varnished. The students did ALL the work: they accurately measured and sawed the wood; they sanded it and glued on the stand; they took a photo and stuck it onto the wood; they finally (and carefully) removed the paper and varnished their gift. The process had to be done in several stages and squeezed into our usual, busy timetable. Happily, we did it! 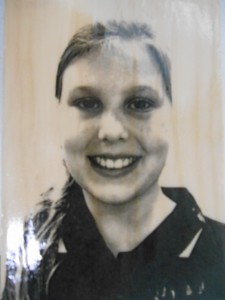 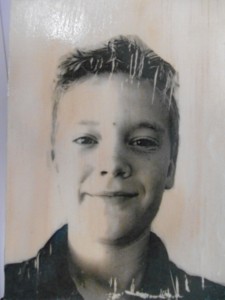 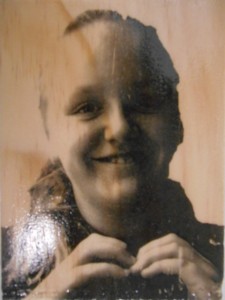 This week we completed another arty activity on the iPads using the Brushes App. The students started by taking a selfie and opening it in the app. They could take a smiling image or one that had an attitude to it. They then converted it to black and white by “desaturating” it. This was important because the next phase was to add lots of colour to create an expressive and balanced image. The students had to keep in mind the balance between the colour they added and the photo beneath it – too much colour and the photo would be obscured and the image would look cluttered; too little colour and it would appear bare and unfinished. The students experimented with layers, brush styles, colour and balance. Below are two examples from Jordan and Samantha. 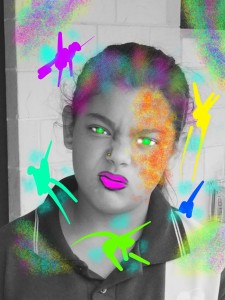 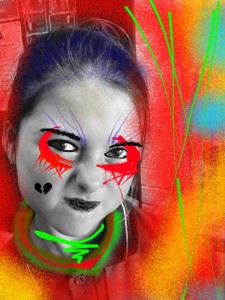 During our in-class Art activities we looked at the way light can be used to create great images. The students took their photos and converted them using Pixir, an app attached to their Google Drive accounts. They then downloaded them from their Drive folders to use on the iPads. Part of our learning was to develop an understanding of the use of layers in image manipulation applications. The students created layers and worked on them, rather than the photo itself. As I’m sure you’ll agree, the results were amazing. 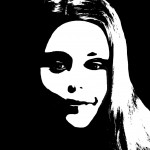 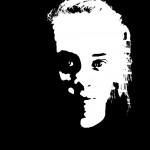 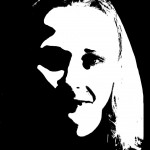 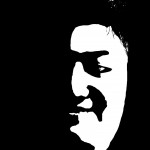 This week The Giants came to Perth as part of the incredible Perth Festival. The Giants are huge puppets that are powered by amazing, energetic people, pulling ropes, swinging from trucks and abseiling from cranes in spectacular red uniforms. The puppets come alive and walk through the street, although a huge part of the attraction is watching the operators as they perform their medieval-like manoeuvres. Have a read of the blogs of Savannah, Shantelle and Tarnika as they pass on their experiences of this fabulous weekend.

A couple of weeks ago our amazing Art teacher, Ms Sveinbjornson, asked me to put my homemade Tardis DVD cabinet in the school’s art exhibition. Whilst a little tentative I agreed, but what I didn’t expect was that it would win the People’s Choice award! I was very taken aback and not a little guilty, thinking I’d stolen the award from the students (as my wife still thinks), but also very humbled that the students had actually voted for it. To show my appreciation here’s a photo of it in my movie room with the certificate on top and a few very meaningful and cherished accessories on and around it. 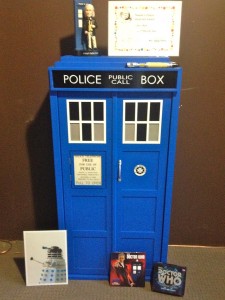 Our 2014 photographic exhibition is now on display in our library. Each year we have a different theme to concentrate on and this year’s was “The Secret Me”. The students had to think about the type of person they are behind closed doors, what they’re like when no one else is watching them. Okay, this was a little personal, though no one had to do anything they felt uncomfortable with. It was also a bit of a contradiction, after all, by showing your secret side to the world it’s no longer secret!

Deciding on a photo that would show their secret side was quite a challenge for the students and involved a lot of thought and planning. However, that wasn’t the end of it. “The Secret Me” is a depiction of how we change once behind closed doors, the side of our personality we keep more private, so the students had to take a second photo that would act as their “door”, a symbol of privacy like a “Keep Out” sign. Yes, this was even trickier! The two images were then combined using different layers and different degrees of opacity so the finished image gave the impression to the viewer of seeing through the “door” to the private person hiding behind.

To complement their photos the students wrote a free verse poem. We looked at alliteration, personification, simile and metaphor, onomatopoeia, line length and punctuation. The poems could only be short so the students had to get their emotions and feelings across quickly and efficiently. Despite this the results were quite exceptional and totally complemented the photos. Check out these two from Demi and Kianne. 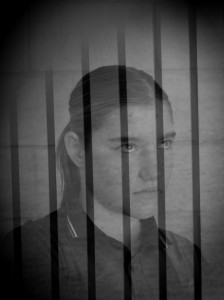 I feel Impatient (Surrounded)
It surrounds me,
wrapping me
in it’s slimy fingers.
I shake.
I move.
But I can’t get out of
it’s locked clasp.
Which one shall it be this time.
Impatient?
Annoyed?
I’m getting used to the pain now.
It almost seems funny.
Almost. 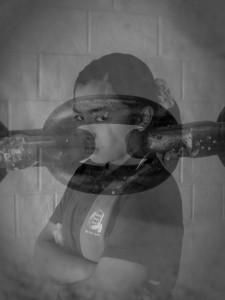 I Feel Angry
No one knows.
Chains surround me,
trying to get my soul.
Crushing me,
smothering me.
Anger comes out
from my mind,
trying to break it.
Tried and tried,
but it’s too strong.
I can’t breathe,
it’s too hard!
What have I done?
What did I do wrong
that made people scared
to help me with this
situation?

Last week the caring, sharing students from LA19 buddied up with our wide eyed year 1 classes to produce some art on the iPads. This was very exciting for both groups, but particularly for us. Every time our year 7 students buddy up with the younger students they come over all caring and parental, it’s great to see (though I don’t think they’ll thank me for writing that). The point of the activity was to give the year ones an idea of the creative potential of the iPads and to help develop their skills in using them. We used the Brushes app (as we have on many occasions) and used layers to create a painted picture of a photo that was also taken with the iPad. The year 7s are only allowed to use their voice to explain things to the year ones, in that way the year ones will gain the most from their experience. It will take us a few weeks to work our way through the year ones, but check out the examples below of what we’ve achieved so far. 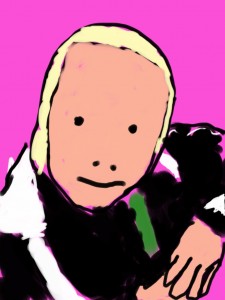 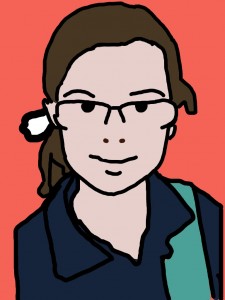 We’ve been doing so many things over the last few weeks that I’ve not managed to post everything. So, to remedy that this is a very short follow up to a couple of our more arty activities.

Our Mothers’ Day surprise (getting less surprising all the time!) started with the students measuring and sawing some wood before drilling a hole in it.  I posted some pictures of the drilling, but the sawing seemed to pass me by, so below is a picture of Benn being helped by Aimee and Jerry. The students worked in groups of three for safety and took the precaution of wearing face masks to protect them from the dust.

Another activity I haven’t caught up with was our fabulous watercolour painting (you can read the explanation of the activity in a previous post). The results were awesome and I’ve included Jonny’s and Abbey’s pictures below. Click on the images to view them full size.

This particular art activity took a lot of time and effort to prepare, but I think you’ll agree it was well worth the effort. Each student had to take around 30 photo’s of themselves before cropping them, copying some and and creating a collage for the background to the finished product. They then used the Brushes app on the iPads to create these stunning images. These are just a few, but the students are in the process of putting their own images on their blogs so you may find more there, check them out. Click on the images to see a full size version.

For the previous two weeks we have been developing our skills with watercolours with a view to producing a piece of art. Today was the day we began the creative process. We were using a work by Kyle Brock called Sails and Sunsets as our inspiration. Below are a couple of pictures of the students concentrating on their art. 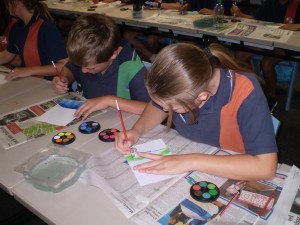 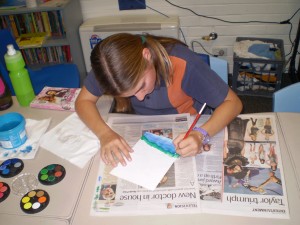