“Winning isn’t everything, it’s taking part that counts.” Yes, this always sounds like one of those sayings people use when someone loses a contest. It sounds glib, insincere and extremely patronising. However, this time I’m talking about our girls’ soccer team and even this saying doesn’t come close to doing them justice. The girls recently took part in a local soccer competition against seven other teams in our district; we managed to win four games but very narrowly lost three. The point is, some of the teams were made up of girls who regularly play for soccer teams outside of school, they had incredible skills and were quite intimidating. Our girls, though, with only two real soccer players in the squad, chased, harried, hustled and fought, never giving up, making their opponents work hard for their wins. The teams full of players only beat us by single goals, two at the most, and our girls made us so proud with their attitudes, efforts and wonderful sportsmanship. No, we didn’t win on the score sheet for some games, we never expected to, but I also never thought I’d be witness to one of the greatest team performances in the history of the school. We didn’t just take part, we really did win – big! 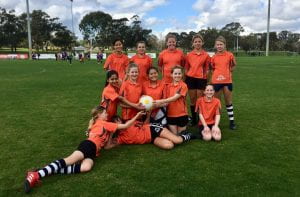